Woerden municipality is known for not shying away from challenges, but tackling them energetically. In the past 15 years, for instance, ‘het Defensie eiland’ , located in the middle of the city, has been developed from an inaccessible and polluted area into a livable, vibrant and interconnecting urban district, where Woerden residents enjoy living and recreating.

The plume of contaminated groundwater, caused by the military laundry that closed in 2005, has been classified as an emergency site by the Province of Utrecht and is currently being remediated. This in no way means that there are no challenges left in Woerden. Clusters of non-emergency contamination, both historical and more recent in nature, also exist at other locations.

The municipality is fully committed to a CO2-neutral Woerden and has set 2030 as its target year. The plan is to build a new gas-free residential area as well as make existing neighbourhoods gas-free. As an alternative heating method, a number of open and closed Heat and Cold storage systems (ATES) have been installed already. Because these ATES systems are in contact with groundwater, existing groundwater contamination must be taken into account. Potentially, the ATES systems could cause further spread of local contamination, which is obviously not desirable.

An additional challenge is that on the outskirts of Woerden a water extraction site is located where groundwater is extracted by drinking water company Oasen. The deterioration of the quality of the water extracted at this location must be prevented. 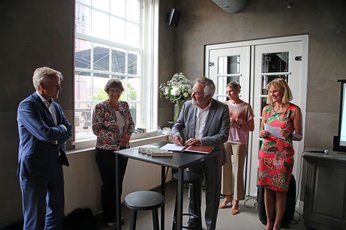 Time for a celebration: area management plan Woerden gets underway

To tackle all these challenges in an integrated manner, Bioclear earth was asked to be the coordinator and to help draw up an area-based groundwater management (GGB) plan. This was a process in which as many aspects as possible were taken into account, clear policy choices were made and all stakeholders were involved. The management plan was completed in early 2022. The plan falls currently still under the Soil Management Act (Wbb), but is already prepared for the arrival of the new Environment Act and the associated changes. Partly for this reason, a covenant has been drawn up in which the municipality of Woerden, the province of Utrecht, water board De Stichtse Rijnlanden and water company Oasen indicate how they will cooperate within this plan and how responsibilities will be divided. This covenant was festively signed on 5 September 2022. 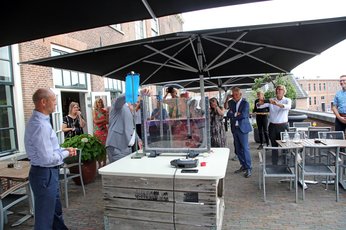 Remarkably, within the GGB, room has been created for an innovative approach to groundwater contamination. Together with the municipality, we have considered a low-threshold way to provide a stimulus to the natural decomposition of contamination in the deep groundwater by making use of the existing ATES. We achieve this by combining the storage of heat and cold in the underground with the injection of pollution-degrading bacteria. This concept which we have developed is known as ATES+ (internal link ATES+). Pilot trials of this approach showed positive results. This means that an ATES is no longer a risk for spreading contamination but actually helps to clean it up!

During the festive gathering, alderman de Regt of the municipality of Woerden launched the 'Area Management Plan Woerden' by activating a scale model of a ATES+. Symbolising a cleaner and more sustainable future for Woerden!

If you would like more information on managing groundwater contamination in your situation, please contact Marloes Luitwieler or Maurice Henssen.