The art of doing by not doing

By nature I have a tendency to overdo things. If something is good or healthy, I assume that more is better, which unfortunately is often not the case. It runs in the family. One of my aunts, for example, loves to take long sunbathes, because it’s good for the production of vitamin D.  Of course she gets totally sunburnt. To remedy this she rubs her skin with litres of buttermilk, because buttermilk soothes sunburns. During my childhood I became fascinated by the growing powers of trees, especially ash, willow and poplar trees, which thrived on the peat soil of our farm. Moreover willows and some poplars are easy to reproduce from cuttings. I tried to plant them as much as I could on our farmyard, without attracting too much attention because my father liked a wide-open view. At first the view remained largely unobstructed, because I totally exaggerated my care for the young trees. The first trees that I planted at the age of fourteen, I put in a plant hole filled with fresh cow manure. I assumed that the trees would be grateful for so much food and would grow vigorously. Unfortunately this was not the case. The young trees started to wilt or to be more precise the roots burnt because of the harsh environment of fresh manure.

Sometimes you try to hard and it backfires. I think everybody has an example of this in his or her own life. I have planted a lot of trees since, but I had learned my lesson. I throw them in a reasonably small plant hole, stamp the soil and leave it to nature to do the rest. In Taoism this is called Wu Wei, the art of doing by not doing.  Note that this mustn’t be confused with doing nothing.  It involves intentional and conscious not acting, doing only what is necessary and giving nature space and time to take its course. Soil management and soil remediation benefits from Wu Wei.  Categorically we want to do too much:  excavating, filtering, pumping or oxidizing with ozone, as long as we do something.  By stimulating natural degradation instead of intervening in nature rigorously, things often can be done so much easier, more sustainable and more cost effective. In agriculture we pull out all stops and use fertilizer and chemicals to grow our crops, instead of doing a little less and adjusting to the natural circles of live. On Saturday 11th of march farmer Bart in the Frisian village of Rotstergaast gave his Jersey cows free ranges in his green meadows for the first time this year after the winter. 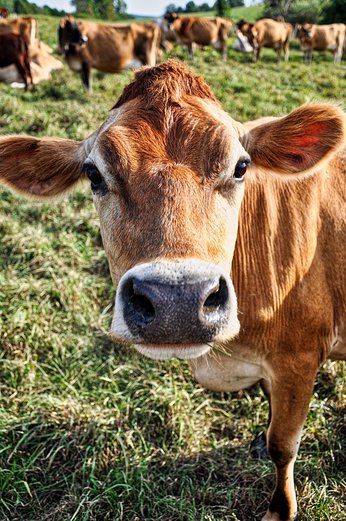 Two hundred people visited this “event”, because famer Bart placed an announcement on his facebook page. Over the past four years, Famer Bart (Bartele Holtrop) hasn’t been using chemical fertilizer or pesticides and stimulates soil health with manure from his deep litter stable. The audience was enthusiastic.  He tries to produce a better product with less intervention and has proven to be very successful in his effort. An organic cheesemaker uses this Jersey milk to produce a special Farmer Bart red smear cheese with natural rind, which was presented at the BIOFACH in Nuremberg. I think a new generation of farmers is emerging, who will give added value to their products by practising the art of doing by not doing.

Published in the journal Bodem.